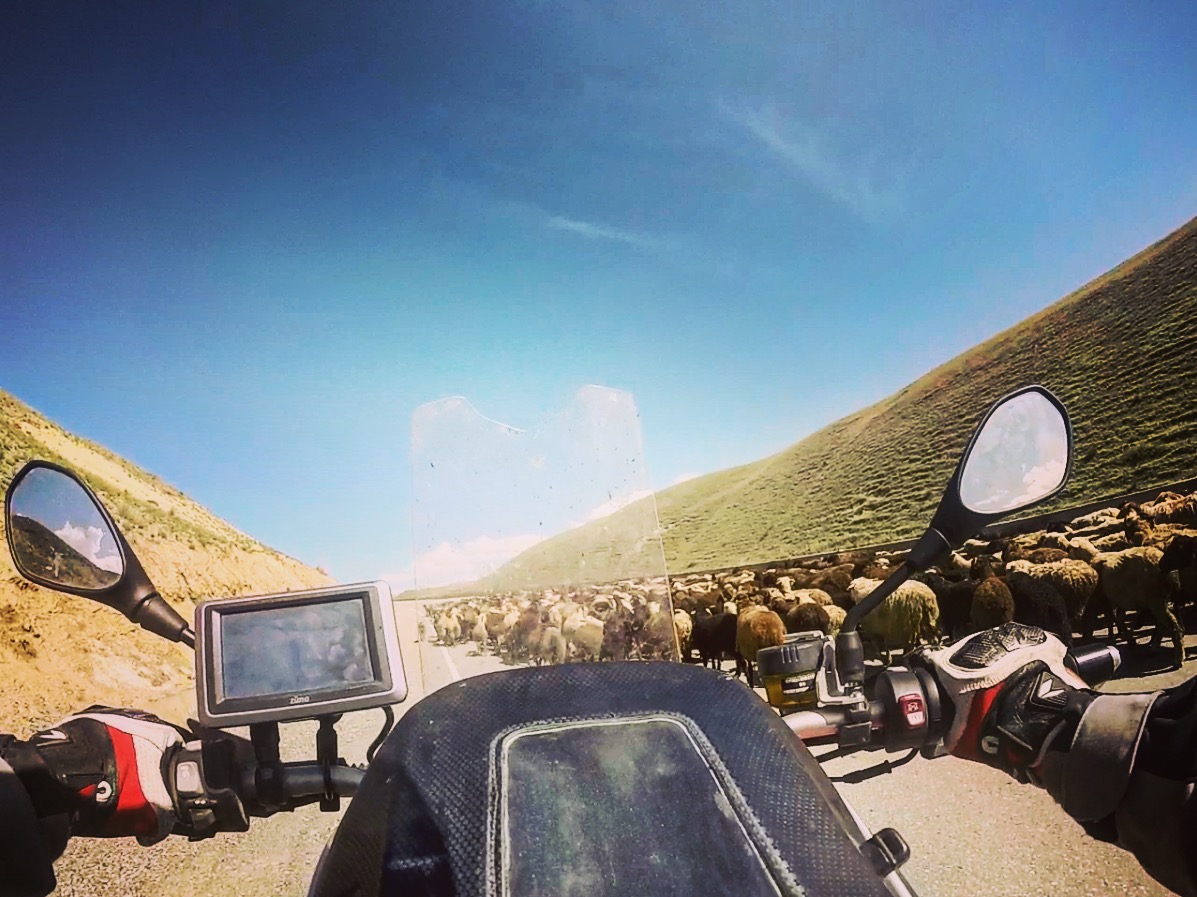 On June 6th, it was time to leave China.  Along with my guide (a legal requirement for foreigners operating motor vehicles in the border region), I headed to the Kashgar Customs office to pick up my customs report.  After the obscenely large packet of papers had been stamped, checked, and checked again, we headed off towards Torugart.  The anticipation was unreal–what if Chinese Customs don’t let me leave? 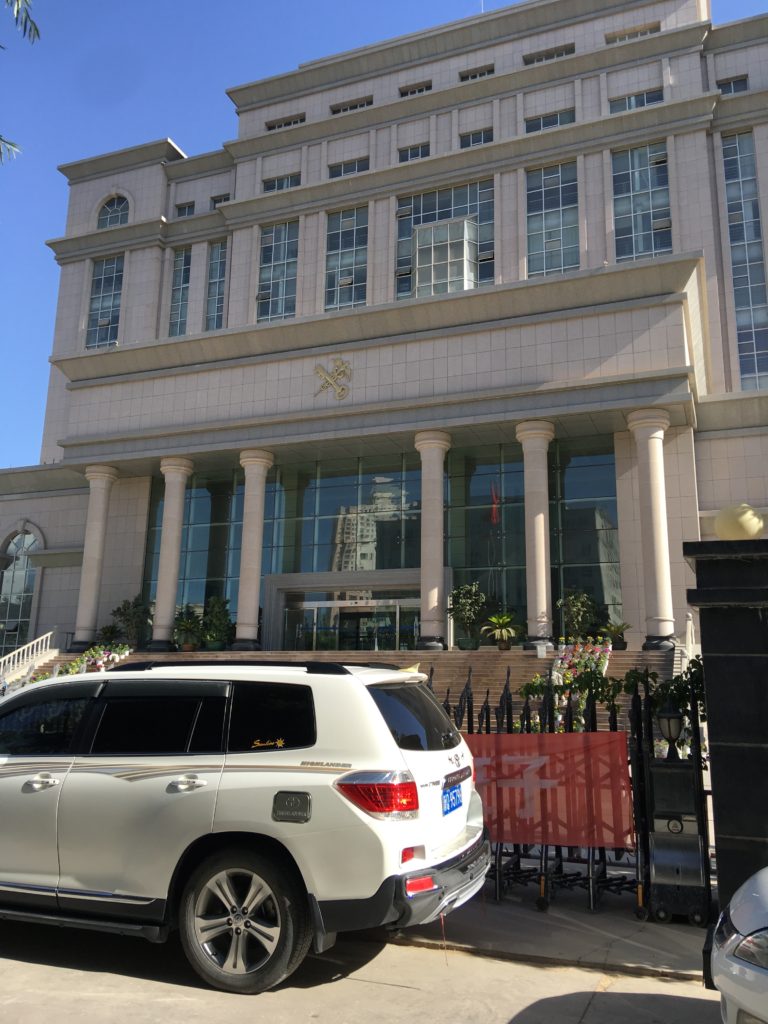 Ultimately, the entire process went as smoothly as it could have gone.  Leaving China via Torugart requires passing three different checkpoints over 100km of poorly maintained roadway.  The first checkpoint includes a passport exit stamp, leaving me an international purgatory for the remainder of the journey towards Kyrgyzstan.  By the time we reached the final checkpoint, the border patrol’s three hour lunch break had come and gone.  After one final passport check, the soldiers waved me through a metal gate.  I was no longer in China. 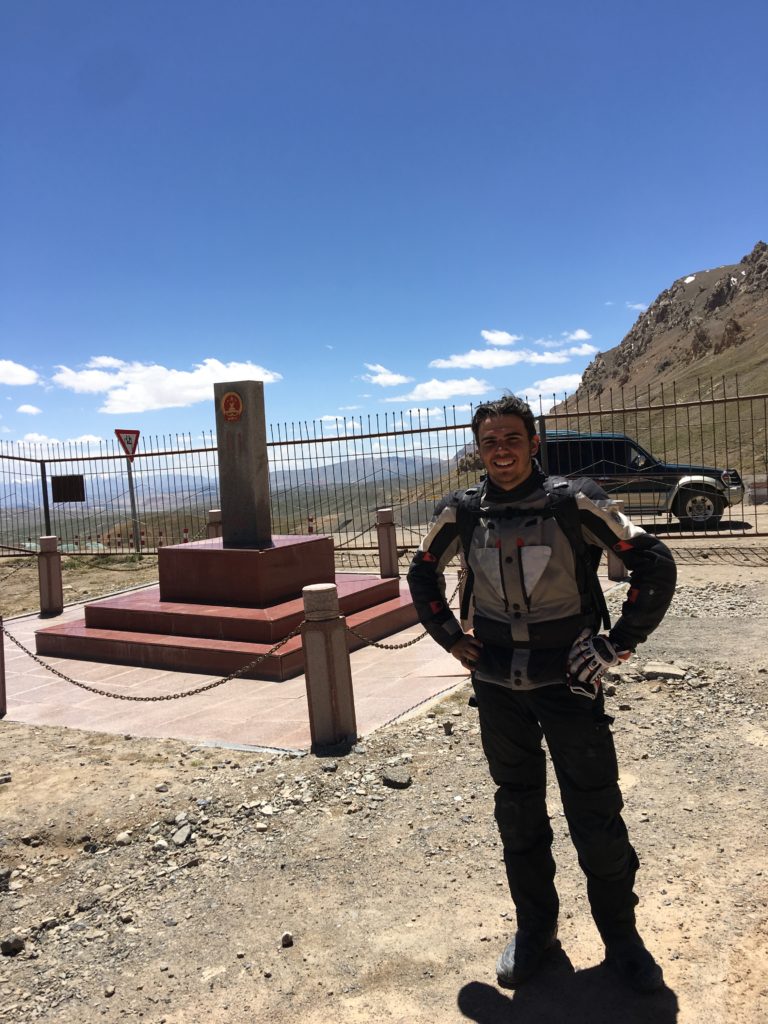 From the other side, things didn’t seem so different.  Kyrgyzstan didn’t have a checkpoint immediately following the gate.  I rode down the mountain about 10km before arriving at the vehicle inspection station.  The customs process was significantly simpler than its counterpart on the other side of the border, even though I speak four words of Russian.  All the guards were fascinated by the bike, and seemed to expedite my paperwork process in return for some pictures with the bike.  By mid afternoon, I cleared the final Kyrgyz checkpoint.  The road was quite alright up to this point, but then the conditions worsened abruptly.  Evidently the Chinese have paved the first 70km of roadway in KGZ, but after that, the road is either dilapidated or in the process of being paved.  Six and a half more hours of intense riding brought me to the capital of Kyrgyzstan — Bishkek. 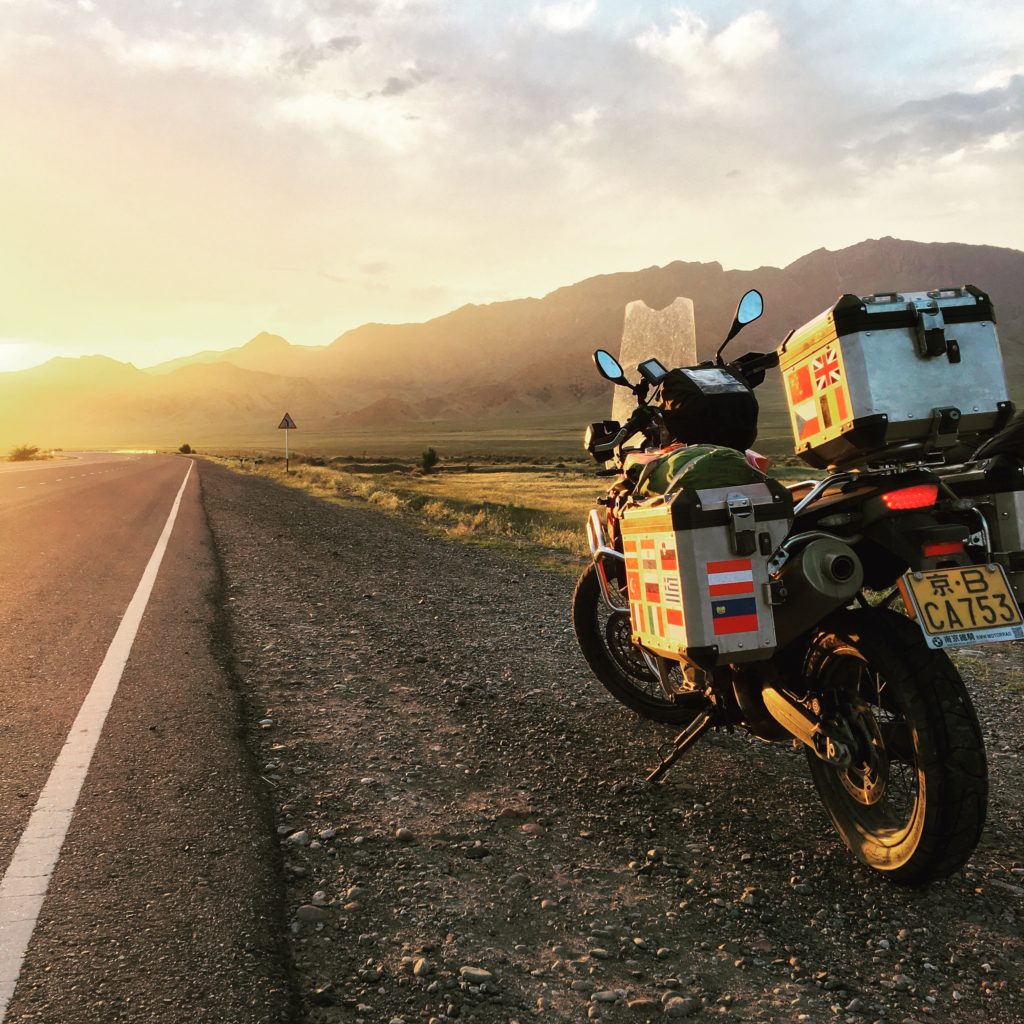 Flanked by the Tian Shan mountains, Bishkek is quite possibly the most bland capital city I’ve ever seen.  Even arriving after a marathon day including a border crossing, I immediately felt underwhelmed.  And then, as if to complicate things further, every hotel in town seemed to be booked up for the night.  My GPS finally suggested Bishkek’s only luxury offering–the Hyatt Regency.  Feeling tired and defeated enough to overpay for a hotel room, I headed towards the main entrance, only to be stopped at the front gate by two security guards.  The ensuing search through my stuff was more comprehensive than any customs process and rather befuddling.  Entering the hotel, I once again had to submit to metal detector + wand screening.  Luckily, the hotel had one final room remaining (it took some talking to convince them to give it to a disheveled American leaving boot prints on the spotless marble floor), and I took it.  The hotel concierge apologized for the heavy security, mentioning an unnamed VIP guest as the reason for the extra guards.  Later that night, I found out that Bishkek was hosting a conference for the Shanghai Cooperation Organization, and Russian Prime Minister Dmitry Medvdev was staying in the hotel.  Coincidentally, my friend’s father was also staying in the hotel as part of a different country’s delegation.  I reached out and he instructed me to be in the hotel lobby at 10am the next morning.  Sure enough, at 10am, Medvdev and posse stepped out of the elevator and marched towards the door.  My friend’s father quickly cut them off and briefly introduced me.  Medvdev nodded, shook my hand, and wished me luck before continuing on his way towards one of three non-descript black sedans.

Armed with Medvdev’s blessing, I set off to see ostensibly the one worthwhile attraction in the city–Ala Too Square.  It also turned out to be rather generic. 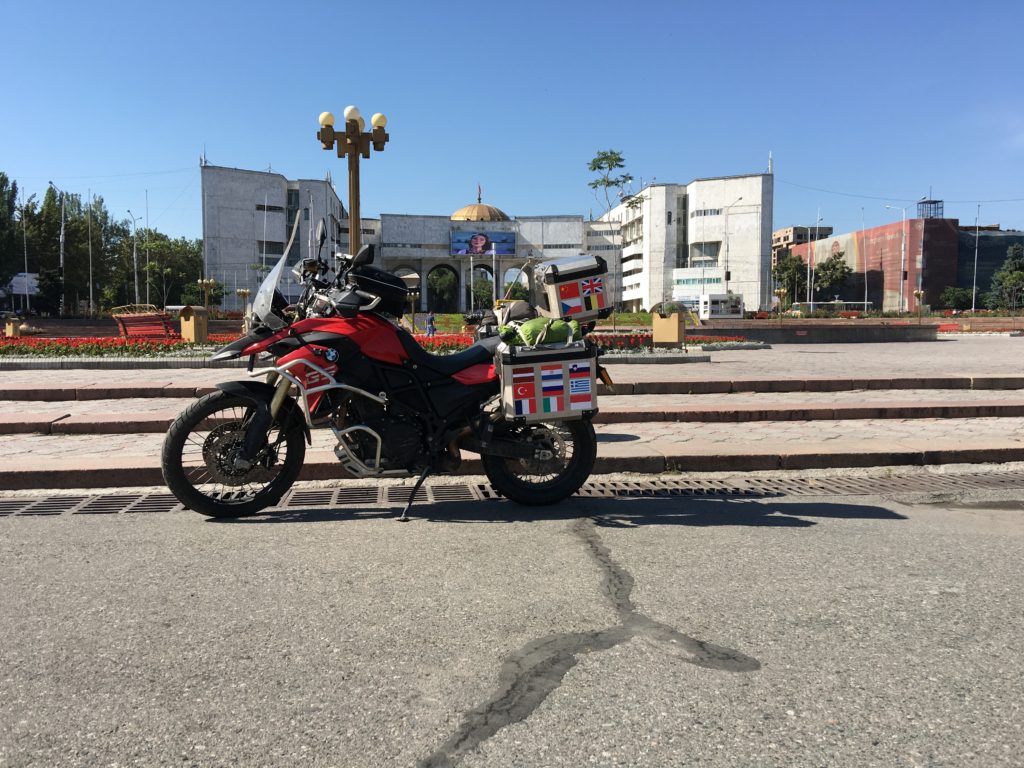 From Bishkek, I set off for Almaty, approximately 200km and a border crossing away.  By mid afternoon, I had arrived and began searching for a motorcycle repair shop.  The GPS coordinates I found online turned out to be inaccurate, and the day was starting to get extremely hot, so I put my maintenance plans on hold and made my way towards the hotel.  Coincidentally, I discovered a local guy also riding an F800 who didn’t speak English, but understood the word ‘Repair’.  He made some phone calls and then led me to the only shop in town that had the two tyres I wanted.  I arranged to come back the following day to get the tyres and oil/filter changed, checked into my hotel, and called my old friend from Beijing–Dias.  Delighted to hear from me, Dias invited me to hang out with him that evening.  He also introduced me to some of his friends and undertook the arduous task of translating everything I said into Russia or Kazakh, and vice versa.

The next day, I got the tyres and oil changed, but failed to find a new tyre tube because the shop didn’t have any in the correct size.  Afterwards, Dias showed me around Almaty, and I must say, it’s a bewilderingly modern and beautiful city. 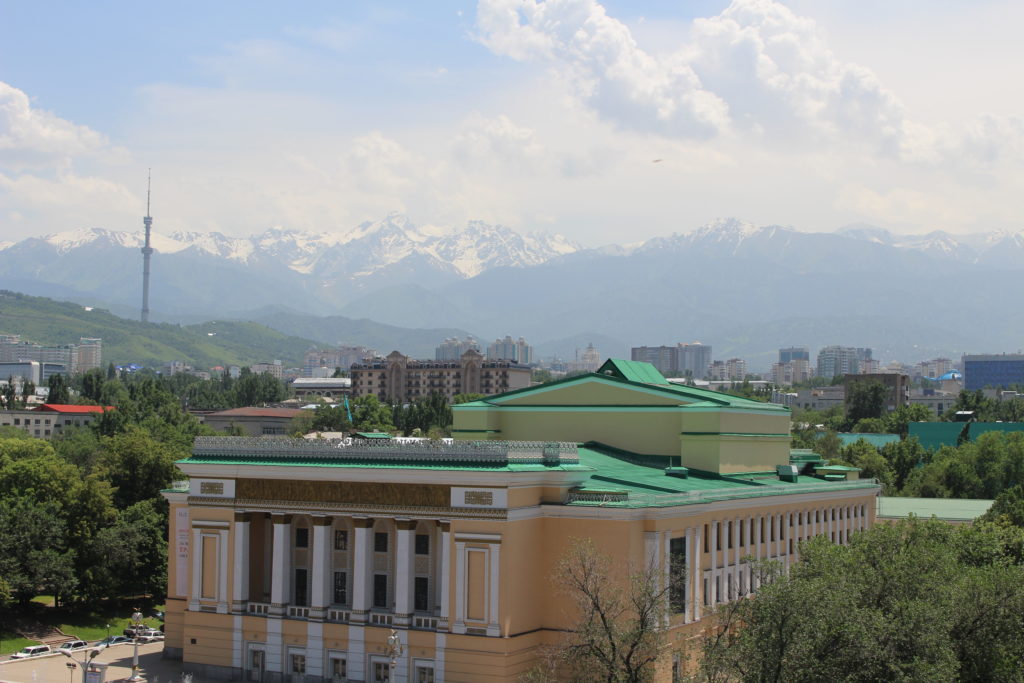 The view from my hotel room

Not quite a European city because the streets are too wide, but not an Asian one either because the architecture is too European–not to mention the hundreds of cafes lining the streets in the center of the city.  Almaty is truly a pleasant place to spend some time, especially since the mountains in the background are only a day trip away. 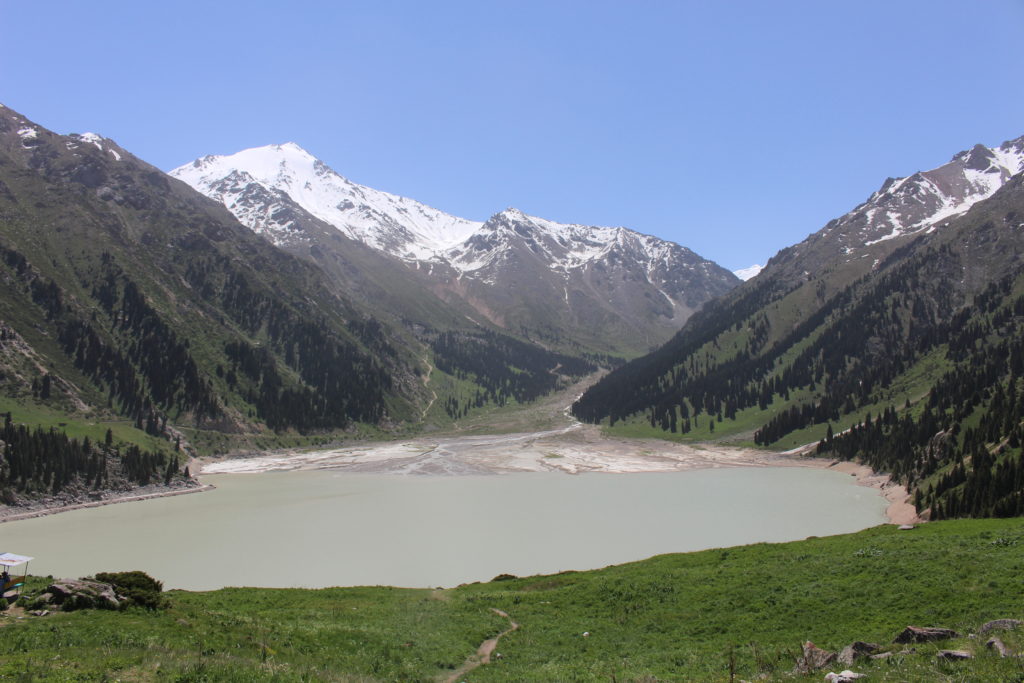 And the roads leading to this point (the Big Almaty Lake) look like this: 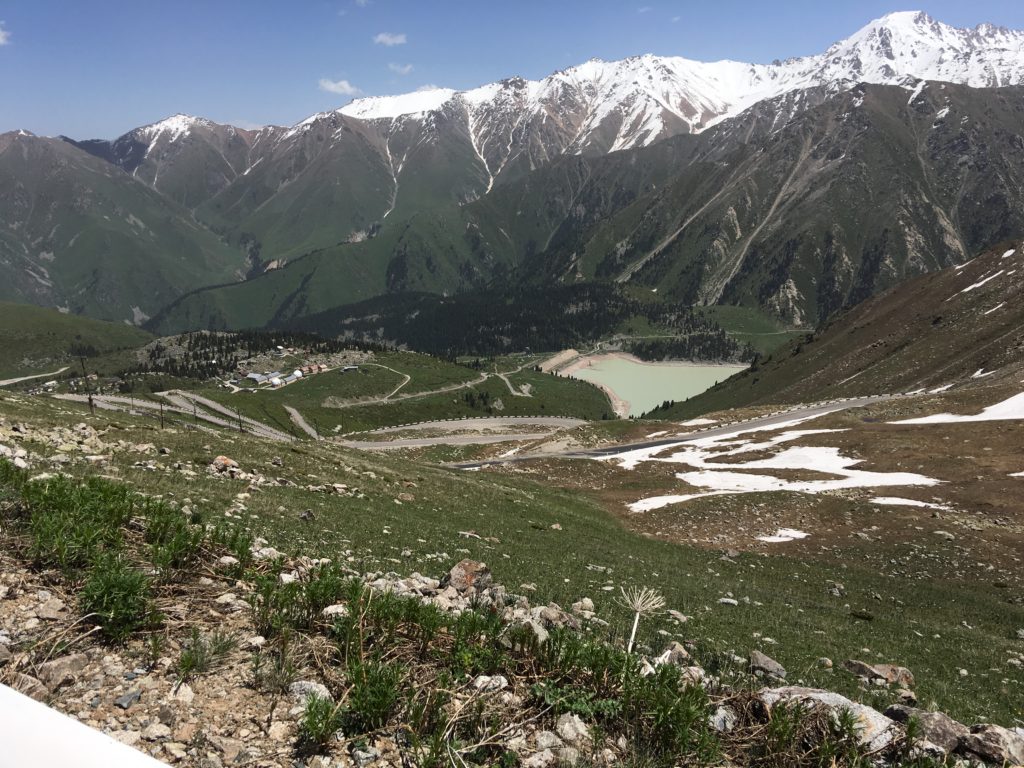 Because of the Almaty’s proximity to the Kyrgyz border, as you climb higher into the mountains, there is a military checkpoint, but with a valid passport, I was allowed to continue upwards all the way until the large (and locked) gate denoting the border.  It wasn’t being used.

Returning to Almaty, Dias took me to a local fast food cafeteria–yet another interesting experience. 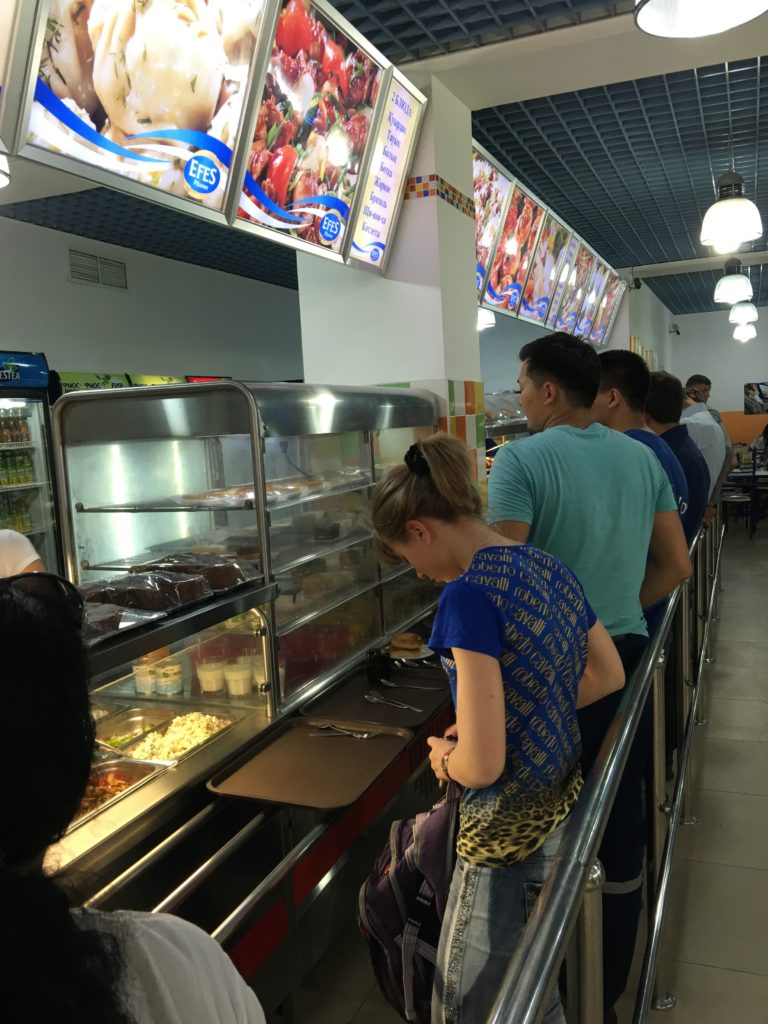 I spent the next few days wandering around the city, seeing a few more worthwhile sights including the Presidential Palace — previously being built as a museum for Lenin. 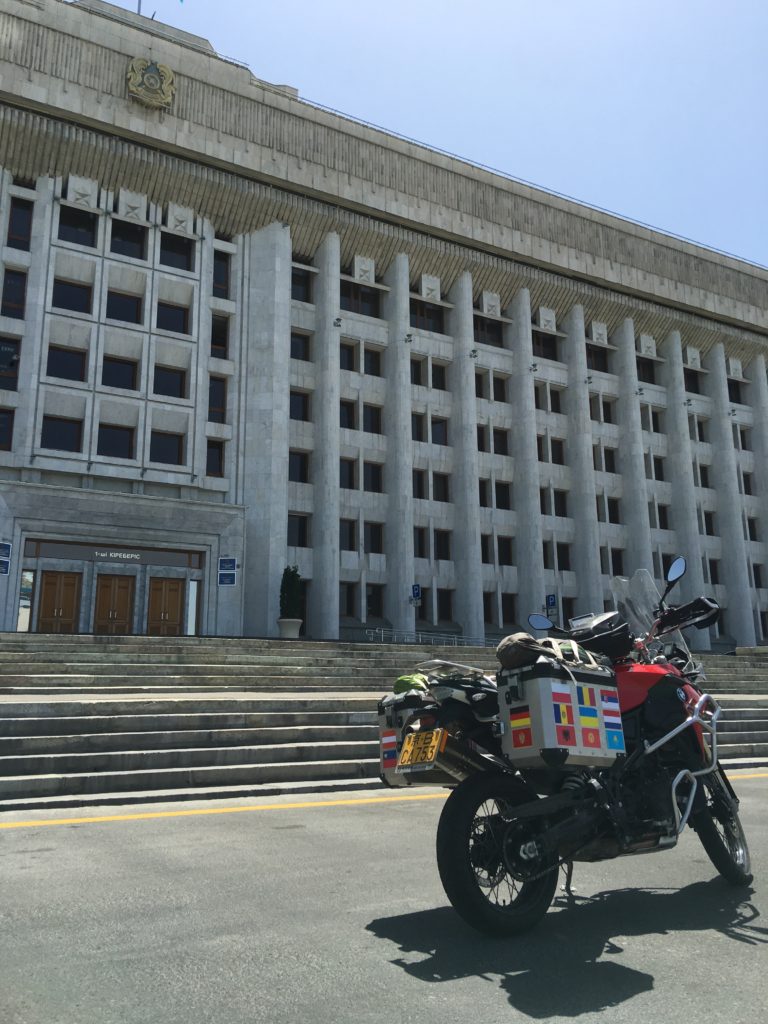 On Saturday morning, I departed, hoping to reach Karaganda or perhaps Astana within the day.  The gods of motorcycle maintenance, however, had other plans for me. 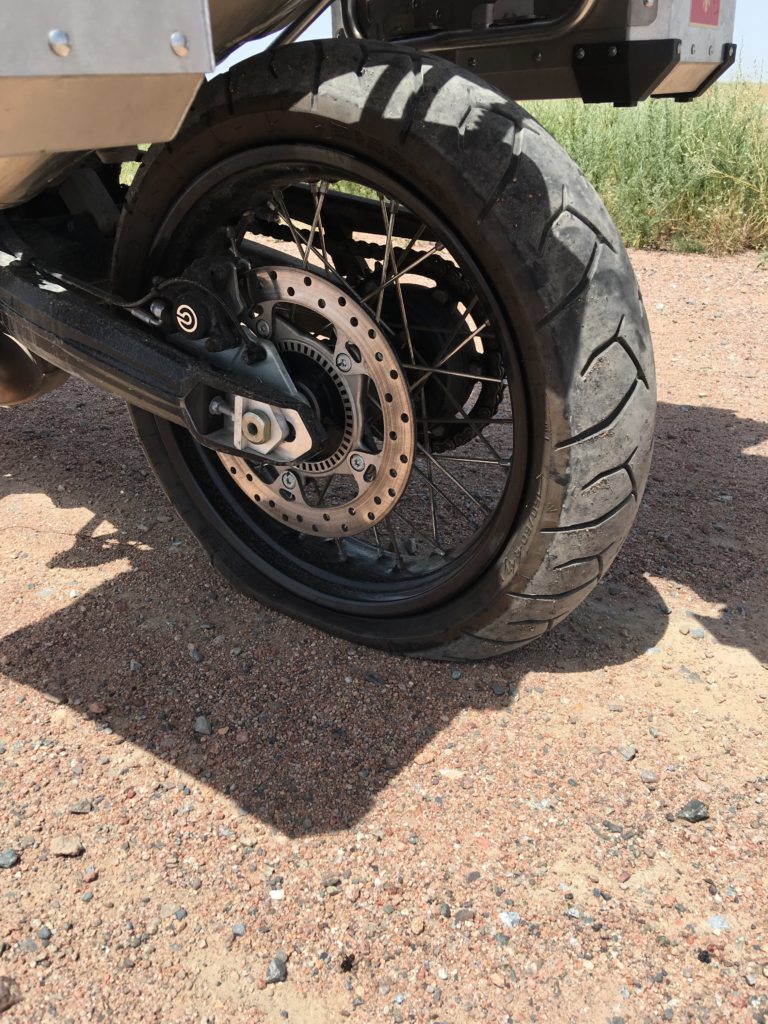 300 kilometers outside of Almaty, my steering started to shake uncontrollably.  I knew immediately that my back tyre must have failed.  I pulled the tyre off the bike in order to check it for punctures, but couldn’t find any.  Realizing it must be a tube issue, I pulled the tube–or what was left of it–out.  The thing was completely ruptured and needed to be replaced.  With minimal cell service, I checked a map and discovered that Almaty was the closest city to me.  Not only that, but the nearest village was 80km behind me.  I called Dias and asked him to help me arrange a tow truck.  After some searching, he found a guy willing to make the drive, but it was going to take minimum 6 hours to arrive.  Tired of the sun and 45+ degree weather, I pitched my tent for the day. 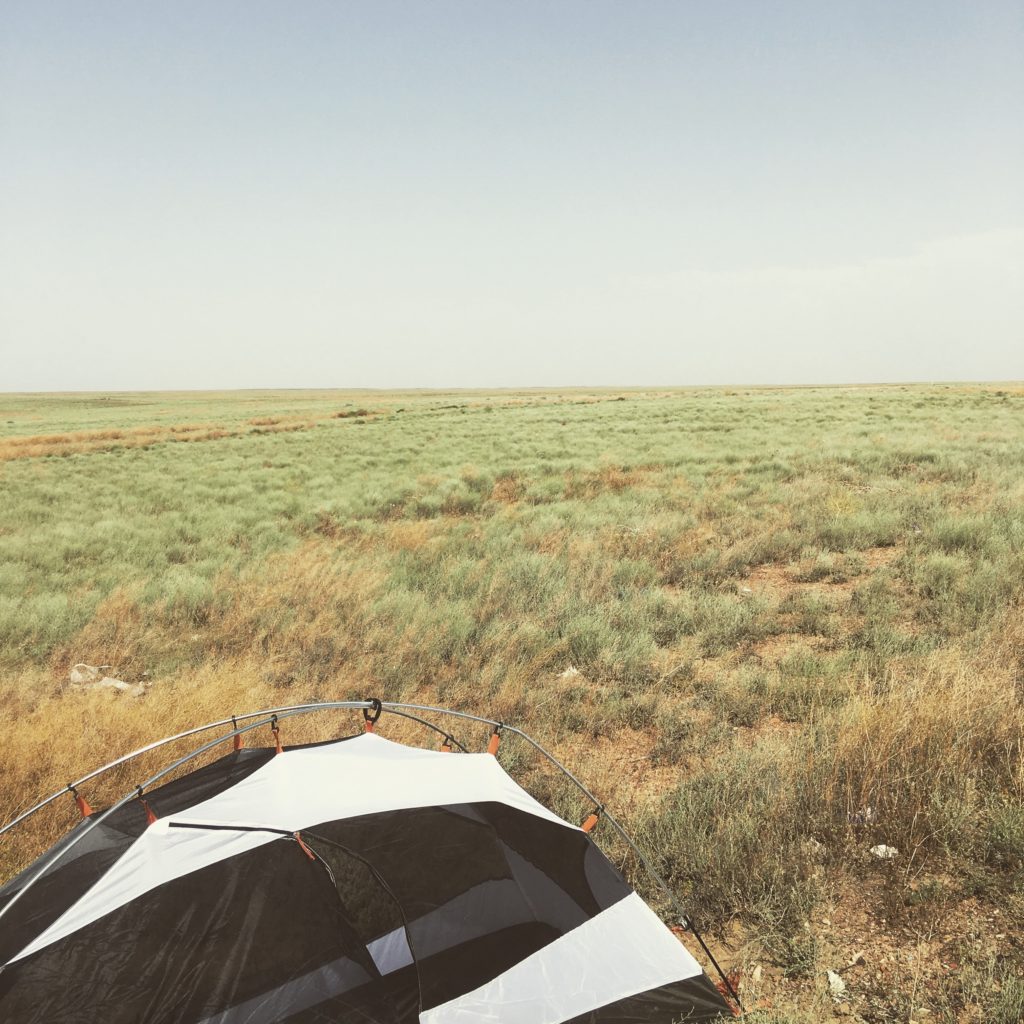 I must say, there are worse places to be stranded.  The Kazakh steppe is absolutely gorgeous.  The tow truck departed Almaty around 2pm, and around 3:30, Dias called to confirm that the guy was headed the right direction.  Around 4, a car pulled up next to my tent and in broken english criticized me for not having a spare tube.  But they also explained not only that there was perhaps a better motorcycle shop in Almaty where I should take the bike but also that they were heading back to Northern Kazakhstan by bike in a couple of days.  I gave them my contact information and resumed napping in my tent.

Being stuck also lent itself to some cool photos: 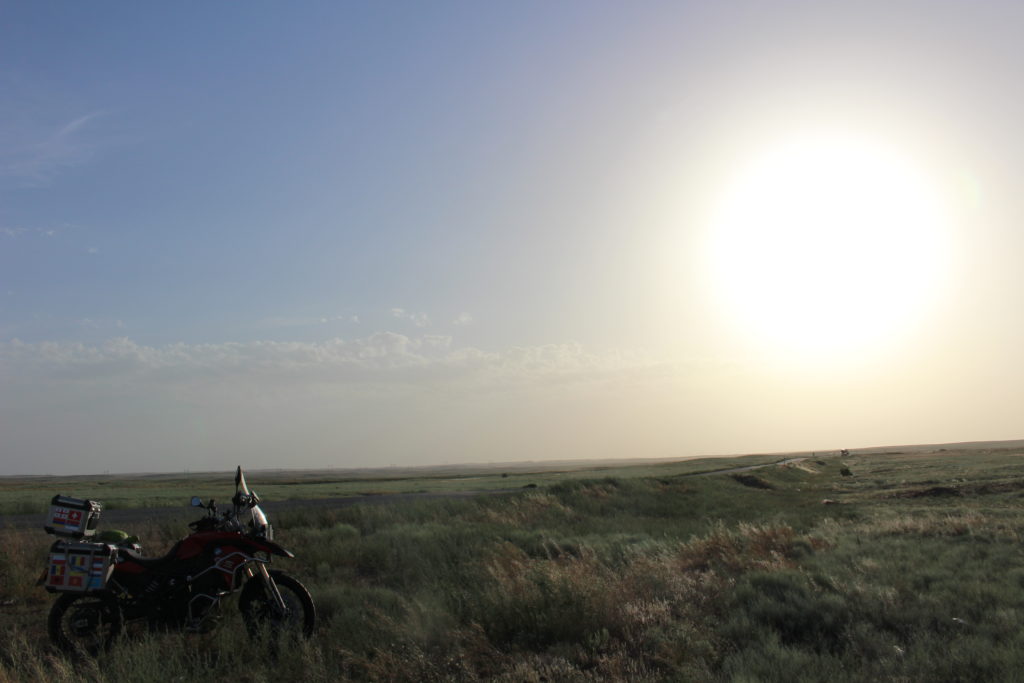 Around 8:45pm, the tow truck arrived, and we slowly made our way back towards Almaty.  Because of the terrible road condition, a truck hauling fragile cargo can only go about 40km/h most of the way.  As a result, I arrived back in Almaty around 3am. 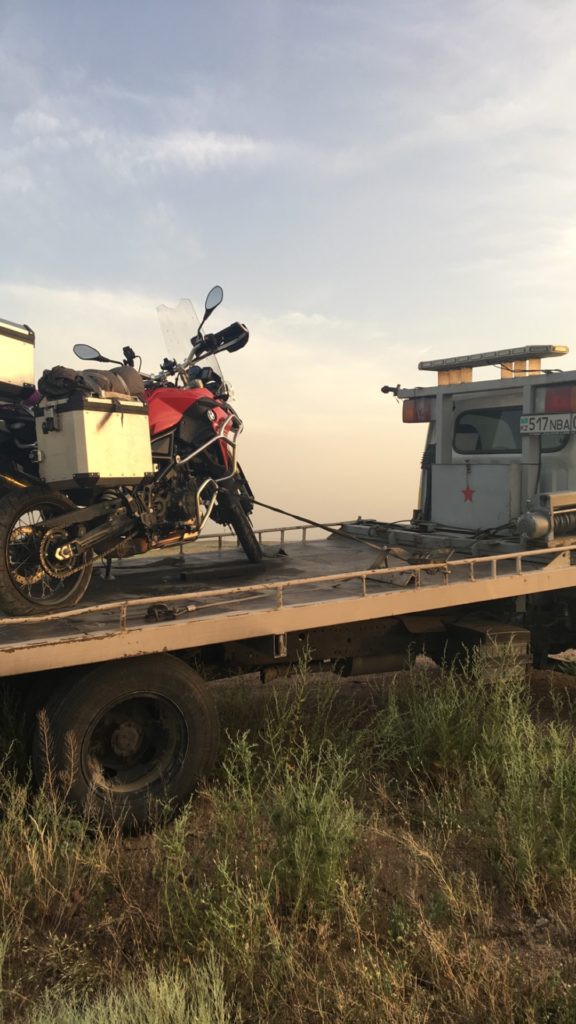 Sunday in Almaty is similar to Europe–not much is open.  However, Dias, my two new friends from the road, and I met up for some coffee.  Slava and Damir are from Pavlodar, a small city in northern Kazakhstan.  They recommended that I cross the border into Russia from Pavlodar rather than Kostanay because of road conditions.  They also said they’d ride with me all the way up to Pavlodar. 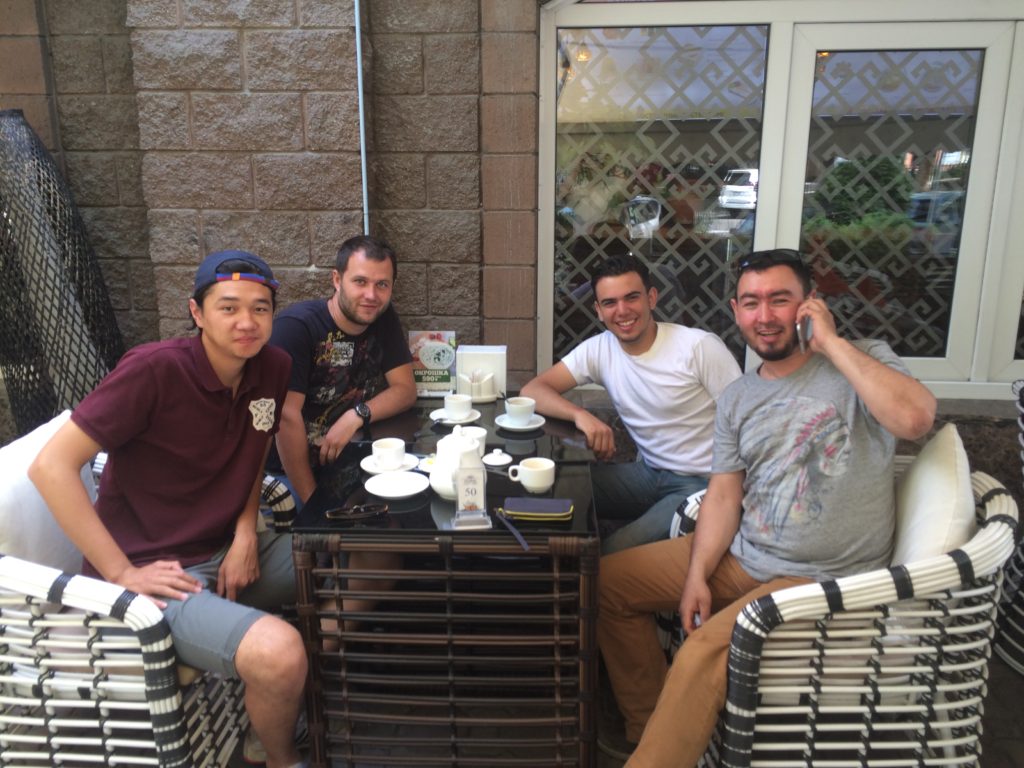 From left to right: Dias, Slava, Myself, and Damir

The next morning, I took the bike for tyre tube replacement and realignment.   The whole process took around four hours, but around 2pm, we were on our way.  To my surprise, Slava and Damir had purchased a Harley Davidson Screamin Eagle and ambitiously wanted to ride it–with a passenger, no less–back to Pavlodar.  The suspension on the Harley was horrendous, not to mention its close proximity to the ground BEFORE a passenger is added.  Nonetheless, my two new crazy Kazakh friends were determined and managed to make it work. 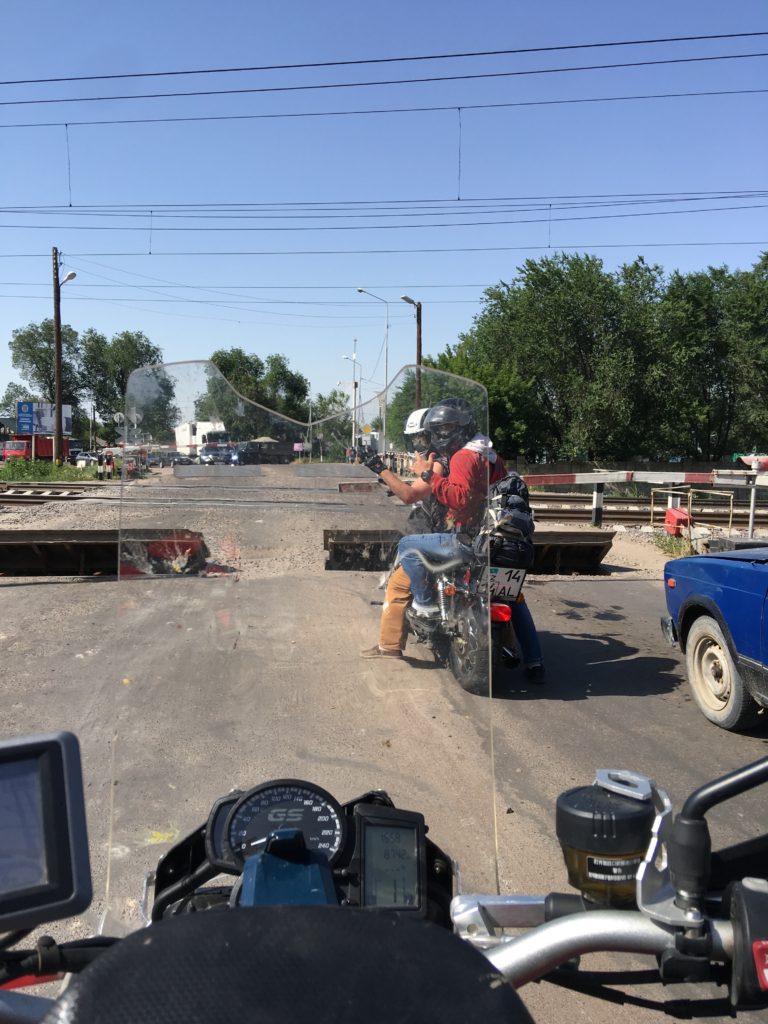 Progress up the road was slow because of the Harley, but Slava and Damir made it work for the most part.  By the end of the day, we’d made it to Balkhash, and the following day, to Pavlodar.  After two days of riding until midnight or later, we were all very relieved.  Damir and Slava actually live about 50km outside of Pavlodar in an even smaller town called Aksu, so I stayed there for the night and met all of their friends. 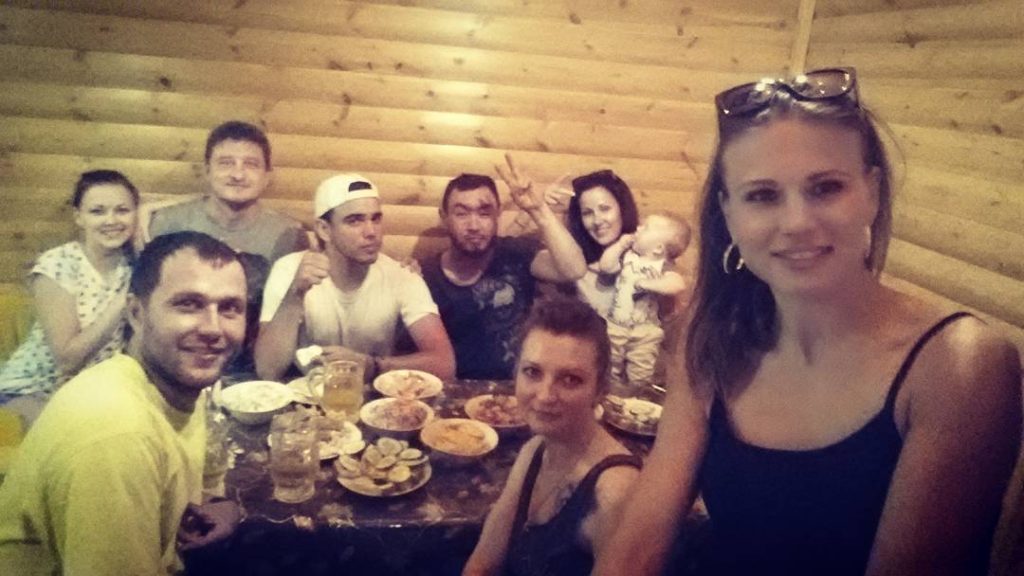 The next morning, I set off for Omsk.  My friends told me the route was fairly simple.  I put Omsk into my GPS and began riding.  250km later, I arrived at the border crossing. 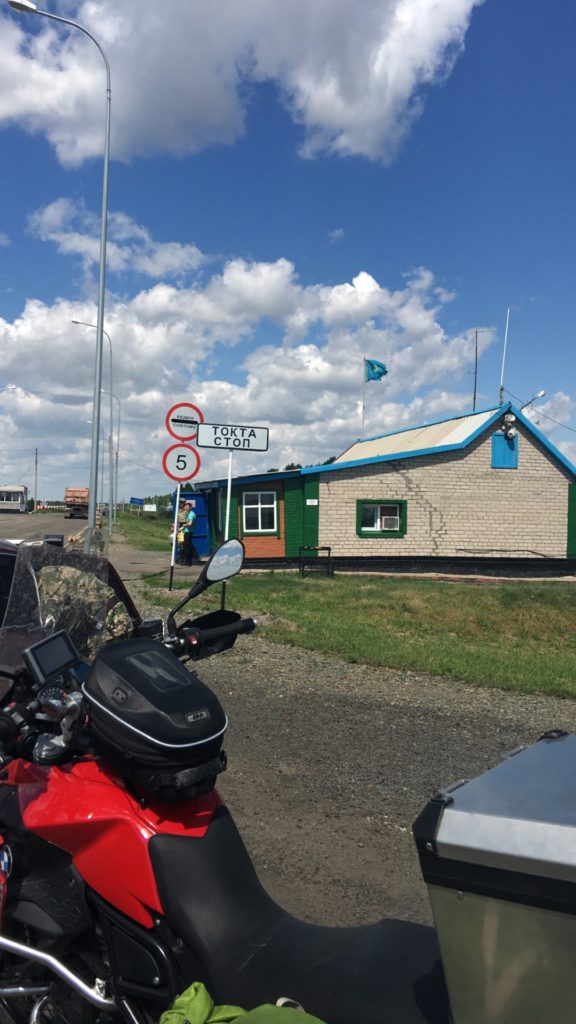 It seemed suspiciously small and lacking in terms of traffic.  My suspicions proved correct; the Kazakh border guard politely explained to me that this border was only for Kazakh and Russian citizens and that I needed to go to the other border.  My Russian still being absolutely terrible, I didn’t understand most of what he said, but I swear I picked up the word ‘boat’ somewhere in there.  Turns out my GPS decided that this exclusive border crossing was closer in proximity to Omsk and thus a better way to go, even though a well-maintained highway directly connects Pavlodar to Russia with a border crossing that allows foreigners.  I was running almost parallel to this highway–10km maximum in between my chosen road and the correct one–but there was a river separating the two roads, and aside from Pavlodar, this river had not been bridged.  Thus, my GPS indicated that the highway was 10km from my current location, but 300km of driving.  Unwilling to add another 300km detour to my route for the day, I decided that maybe the border guard was trying to explain that there was a ferry across the river.  I wandered into a village on the river and started asking people about a boat.  After three or four tries, I got instructions that were clear enough and managed to find the ferry. 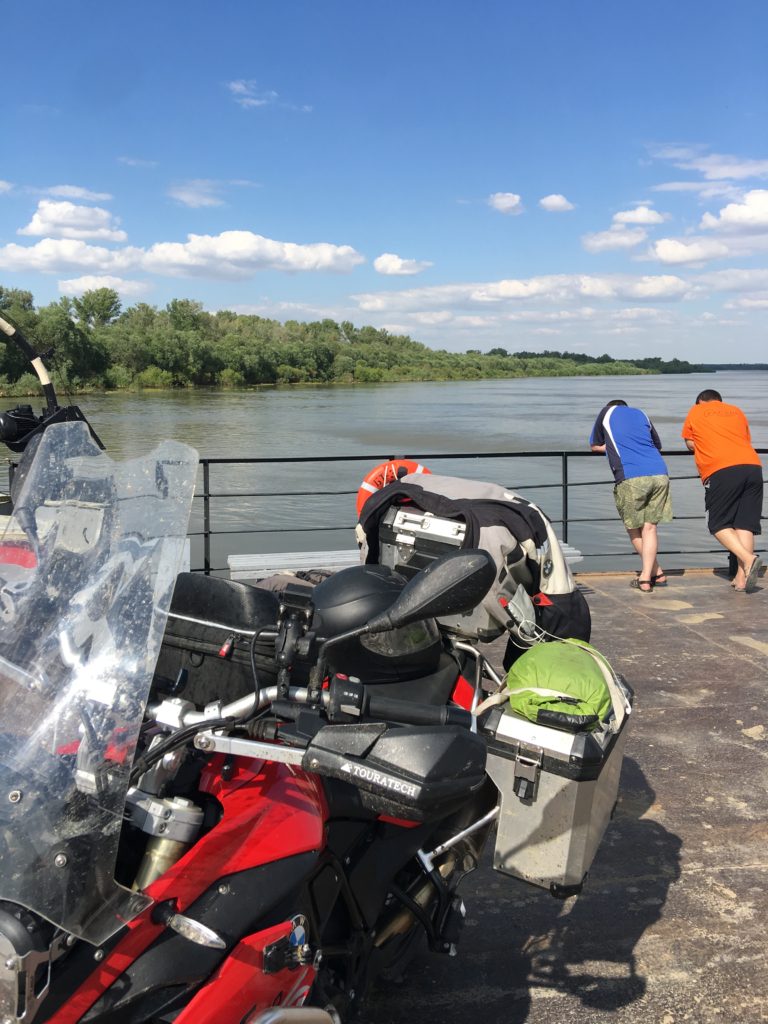 20 minutes later, I was back on track! By 6pm, I finally reached the border. 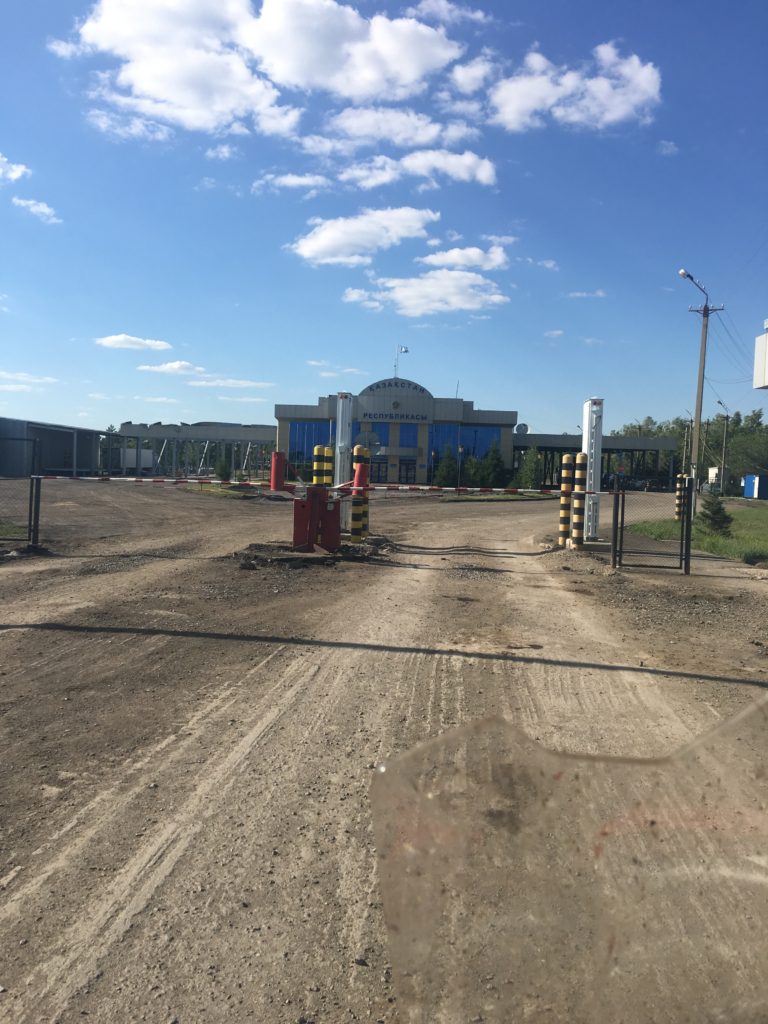 Both sides were rather smooth and efficient, probably a result of the large amount of traffic that this crossing receives.  I was legally stamped into Russia by 8pm and arrived in Omsk around 9! 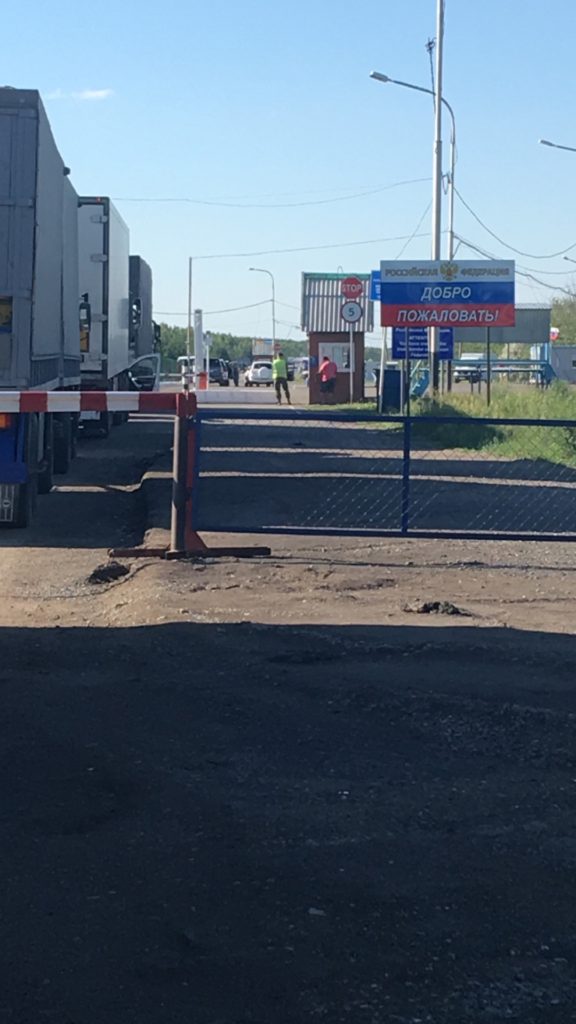